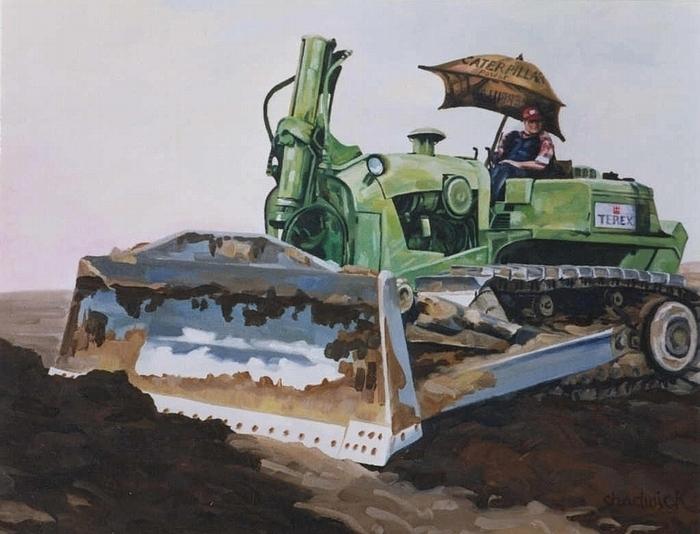 George and His Dozer

Original - Not For Sale

This piece is not for sale.   Please feel free to contact the artist directly regarding this or other pieces.

George and His Dozer

Meet George Craib, our neighbour in Hammertown (circa 1842) on his favourite bull dozer working on our front field... which used to be our front hill. He did a fabulous job and used all kinds of equipment... scrapers, tractors, several dozers. He was very, very good at moving and shaping earth! He was smiling in spite of the arrangements for his daughter's wedding later in the week. The sunrise behind him was the sky at about 6 am on Monday July 5th, 1993. I was on my way to work at the Ontario Weather Centre.

George was one of those quiet, calm and capable Canadians who took pride in the land and did his very best to look after nature and especially the forests. He worked hard and made the impossible look easy. We need more like George.
Hammertown was founded in 1842. There was a blacksmith shop at the crossroads of the 12th Concession and 17th Sideroad. The ringing of his hammer could be heard a long ways - especially with a strong radiational inversion ...

I gave this portrait to George as my way of saying thank you for makng the project on the 12th Concession of King Township a success. We planted thousands of trees together and he has many of my Peterson Blue Bird houses on his extensive property. Within a few years, the abused twenty acres of land was a natural paradise that abounded with nature that had returned.

I have hundreds of George stories and they are all true. To call him a colourful character would be an understatement. He had pet geese and ducks and cats. Once he used a hundred dollar bill to clean up some goose poop at the bureacratic licencing office. His goose would follow him from job to job and fly alongside the road. I rebuilt his chicken coop and sometimes helped him on his projects.

George was a master and a dear friend - I can't thank him enough for his knowledge and wisdom.

Always so nice to hear from you Norman! Thank you.