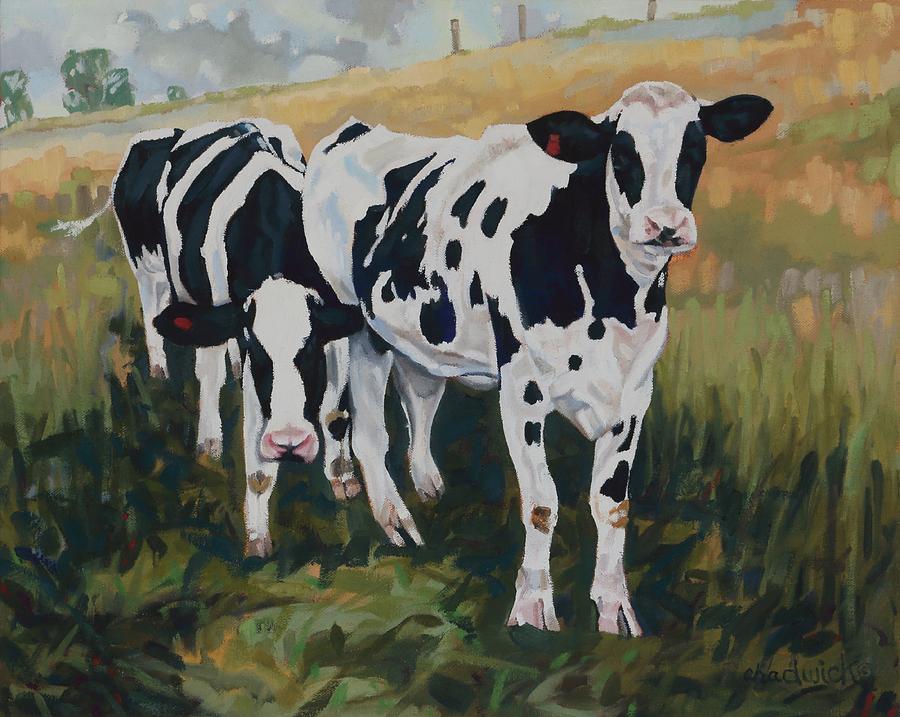 Starting in April each year, our Schomberg friends, the O'Hara's bring over a small herd of Holstein heifers that spend their summer vacation on the back 15 acres. When they return to their home on the 11th Concession in the fall, they will be bred and thus starts their career of milk production and calving. Thus their short pilgrimage to Watershed Farm on the 12th Concession is like going to "Graceland" or "Grazeland" as it maybe misspelled. Thannk yuuuuu verry mucchhh! Thanks Elvis!

Graceland was also the seventh solo studio album by American singer-songwriter Paul Simon which was released released on August 25, 1986. "Graceland" was the title song which also featured Don and Phil, the Everly Brothers. The lyrics deal with the singer's thoughts during a road trip to Graceland after the failure of his marriage. It was listed at #485 on Rolling Stone's 500 Greatest Songs in 2003 when I did this painting.

While at the farm, these heifers behave more like curious big black and white dogs that follow me around. This explains the photo opportunity that is pictured in the painting. I was checking on the trees that I had planted.

I had wanted to paint outside again but it was still much too windy and cold on that January morning in 2003. Schools were closed and every now and again, the visibility dropped to near zero in snowsqualls. I picked this image from my memory and photo album.

Beautiful painting and subjects with their eye-contacts Phil. Likes + Favorites.

Thanks Asbed... yes, those heifers followed me like puppies when I walked in the back fields. Fun!

Such beautiful colors and patterns...the field and sky are so soft and the foreground subjects are clear and popping out with the black and white contrast...beautiful shapes and lines. Wonderful work, Phil Chadwick! Love it! L/F

You are very observant Sunny. Yes, I was in a soft mood and handled the distant clouds and landscape with a soft almost pastel touch... and plus I love cows. You are so very kind. Thank you.