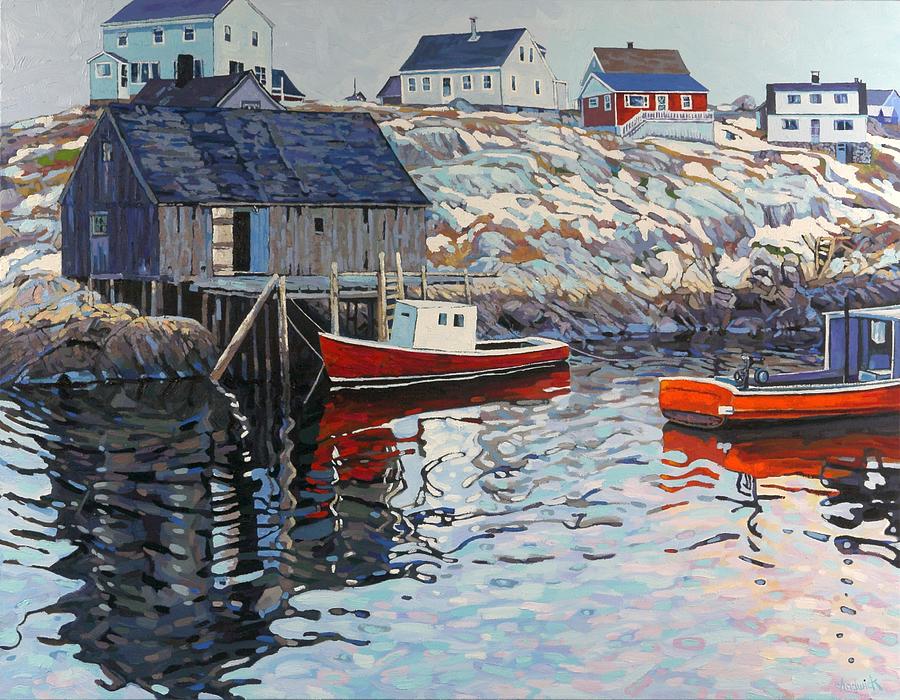 I was behind the camera on this Maritime memory. We frequently had company visiting us in Nova Scotia when I was first posted to Canadian Forces Base Shearwater, CYAW with the Atmospheric Environment Service. Peggy's Cove was and is always a great place to go. I have painted these boats many times before. The red boat had a white super structure in 1985 instead of turquoise as I had painted it earlier in 1979. There is a lot of history in this tiny cove.

According to legend, Peggy's Cove was named after the only survivor of a schooner that ran aground on Halibut Rock and sank in the mid 1800's. The woman was named Margaret. My acquaintance artist and cove resident William deGarthe said that the survivor was a young woman while others claim she was a little girl too young to remember her name and the family who adopted her called her Peggy. The young shipwreck survivor married a resident of the cove and became known as "Peggy of the Cove". Visitors from around the bay eventually named the village Peggy's Cove, after her nickname.

Another version of the story behind the name goes back much further though and more than a hundred years before Canada. Apparently the first recorded name of the cove in 1766 was Eastern Point Harbour or Peggs Harbour. The village is likely named after Saint Margaret's Bay and Peggy is the preferred nickname for Margaret. Samuel de Champlain had named the large bay after his mother Marguerite Le Roy.

The village was founded in 1811 when the Province of Nova Scotia issued a land grant of more than 800 acres to six families of German descent. The settlers relied on fishing as the mainstay of their economy but also farmed where the soil was fertile. They used the surrounding lands to pasture cattle. In the early 1900s the population peaked at about 300. The community supported a schoolhouse, church, general store, lobster cannery and boats of all sizes that were nestled in the cove. As roads improved, the number of tourists increased. Today the population is smaller but Peggy's Cove remains an active fishing village and a favourite tourist destination.

The original lighthouse was built in 1868. Exactly 100 years later, in 1968 the Campbell family opened the Sou'Wester Restaurant.

We arrived in Nova Scotia 1977 as I started my career as a meteorologist. Nuclear physics was fun but Three Mile Island had cast a pall over nuclear energy. I had always been excited by the environment and hoped I could make a difference in the science. Nova Scotia was a terrific place to learn about the weather and meteorology. We frequently travelled Route 333 to the Sou'Wester Restaurant especially when the weather was forecast to be really nasty. We could bring some business to the quiet dining room and watch the surf break up to the lighthouse. Everyone had a good day and I would often find painting material.

We loved touring the beautiful province and it was a challenge to leave the Maritimes to follow my career. It was important to learn about the other weather regimes of Canada and that required some moving around. It was also important to paint something other than Peggy's Cove.

This was a commission for my wife and I selected the finest canvas that I had to paint on. It brings back a lot of very fine memories.

Congratulations! Your amazing master piece is part, of a SPECIAL FEATURE SERIES; and, featured, to accompany: PEGGY’S COVE FISHING VILLAGE, award winner, painting, of the GEORGE F. G. STANLEY AWARD SPECIAL FEATURE, in the Red Maple Gallery, homepage group, of Fine Art America, for the month of May, 2021.

Thank you so very much Andrew!!

A gorgeous piece of work!

Thank you, very kind of you Bruce!

Congratulations on you Feature in Canadian Artists for Fine Art America!

Your photography is eye catching as well... Terrific. Thank you for appreciating my art.

Plein or studio...it's the end result that counts...great job Phil!

You are so very right Ken... Thank you so much.

Congratulations on being featured in the FAA Group 'Art of Atlantic Canada.' To ensure your feature remains available over time, post your featured image(s) in the Group's 'Thanks for the Feature / Image Archive.' l/f and p if you allow pinning (www.pinterest.ca/tendrelimages/art-of-atlantic-canada/)

Thank you Murray. I am proud to be part of the Atlantic Group!

Very fine color and detail...wonderful light and reflections...such a gorgeous scene and the backstory is great! Super composition! l/f

The strength of a Studio piece is that the unlimited time allows one the luxury of pondering and planning each stroke of colour... which is also the greatest weakness. Plein air forces me to just charge ahead and let "The Force" guide your hand and the brush. I like them both but must admit to preferring the Studio when the wind chill is minus 20 or the biting bugs are dominant. Thank you so very much Sunny.