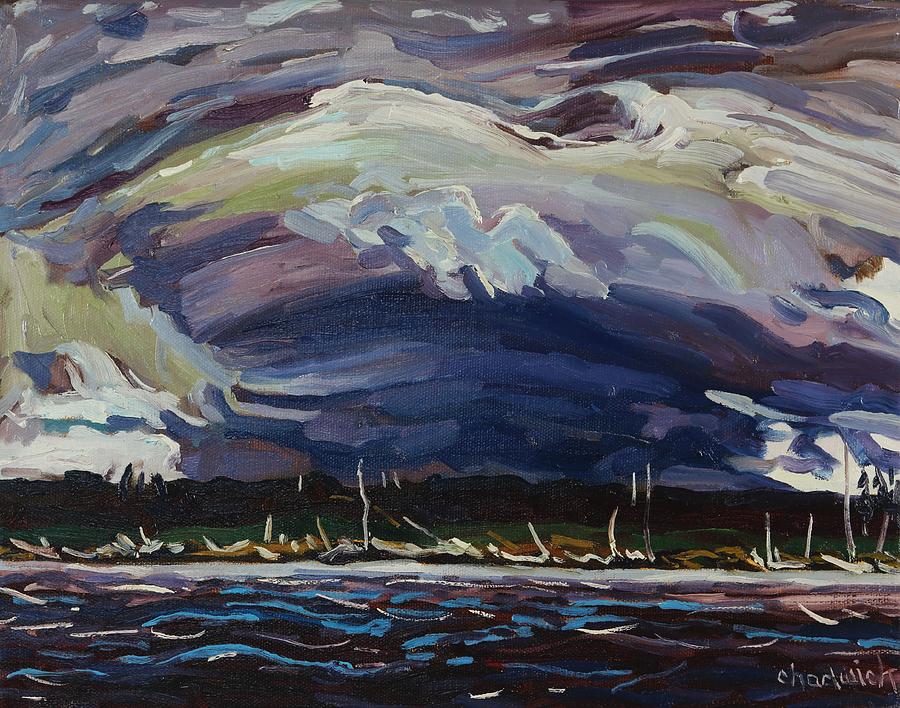 Original - Not For Sale

This piece is not for sale.   Please feel free to contact the artist directly regarding this or other pieces.

I painted this sketch from "Thunderhead" by Tom Thomson in support of an article I had written about the meteorology in Tom's sketch. I don't believe that anyone really understood the true motivation behind this painting before. Quite simply, the sketch is Tom's observation of an EF2 intensity tornado. Tom called his sketches "records" of what he saw. He collected these observations in the same way his relation Dr. William Brodie collected specimens. Dr. William Brodie was a cousin of Tom's dad (Tom's father was also something of a naturalist.), who was 9 years older than Tom's father. Dr. Brodie was one of the finest naturalists of the day. Brodie was director of the Biological Department of what is today the ROYAL ONTARIO MUSEUM from 1903 until his death in 1909. Tom Thomson collected specimens with Dr. Brodie, who gave him the rudiments of a naturalist's training. From Brodie, Thomson learned how to combine keen and enthusiastic observation of nature with a sense of reverence for its mystery.

Tom must have been pleased with this sketch. He signed it and Tom didn't sign many of his sketches. He didn't name his "records" either. He deserved to be very proud of his efforts which had to be captured in the fleeting moment of the awe of the tornado. In Tom's day, they were still called "hurricanes" by most. Tom included enough meteorological clues in his record that permitted me to apply "CSI" (Creative Scene Investigation) to his sketch. The meteorology that he painted was not fully understood until the 1980's and there is still more to learn about the mystery of the tornado. Tom certainly wanted to learn more.

There is even more to be discovered in the painting when one tries to copy it yourself. I saw some olive green in the painting for the first time while I was painting my copy. Green in a cloud is indicative of very high moisture content in the atmosphere. I tired to place the same time constraints on myself that Tom must have faced while he was observing the moment of awe. Upon completion, I see that my palette was more colourful than Tom's... I thought I was matching the colours fairly closely as I went... maybe I put too much time pressure on myself!

In addition, Tom must have been painting this in bright sun and very warm conditions. The darker colours of paint were virtually dry when he rolled on the cerulean highlights of the water and signed his name. He could have added these the next day of course but I am assuming he painted all of this on location.

Thanks Sunny. People often ignore the power of nature. I really on it but from a safe distance.

Wow love this I can feel the energy !!!!

Kind of you Beverly. The entire rotational energy of the supercell is focussed on that spot. I paint a lot of weather :>) Life is good!