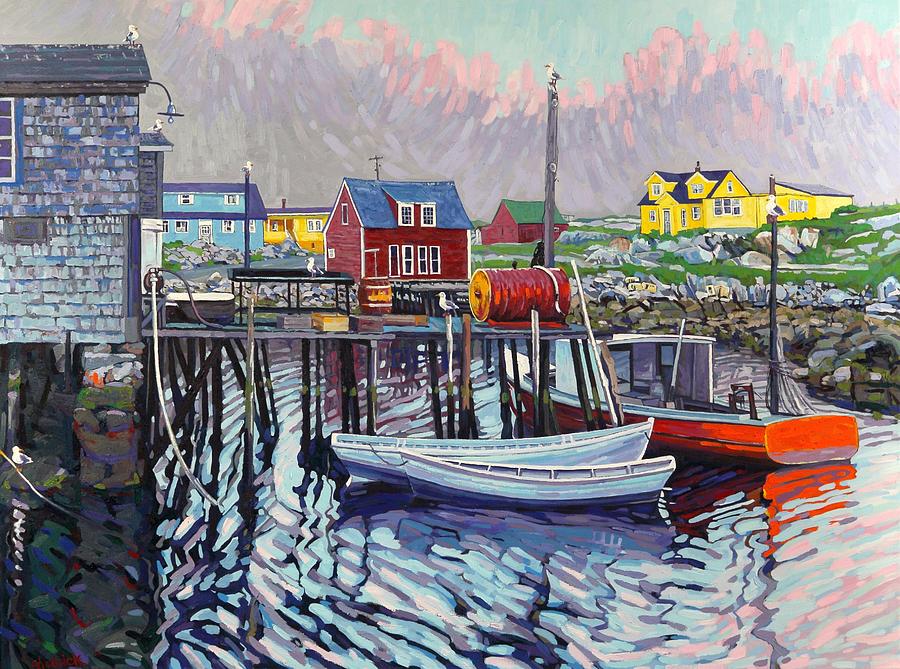 Peggy's Cove has changed so much over the years despite the best efforts to keep the area the same as it remains in the memories of the old timers. This image is from June 1978 BC (BC stands for Before Children in this usage) and Peggy's Cove still looked like a quaint and authentic fishing village. The Cove was an unhurried Sunday drive along the Prospect Road which was also known as Peggys Cove Road or Highway 333. Many of the buildings that Linda and I saw in June 1978 have transformed to meet the demands of the burgeoning tourist trade. We would go to the Sou'Wester for a lunch and then continue along the south shore of Nova Scotia. There was always something to see and to inspire.

Shearwater was my first meteorological posting. If you wish to learn about the weather, go east young man. The weather was always changing and the art of a careful analysis of the science and the observations were still key to understanding the meteorology and the concern of the day. I wish I had a few of those early analyses on hand plotted maps with coloured terrain. The weather of the eastern seaboard taught me a lot. I am still learning and hopefully will never stop remaining the eternal student.

The original lighthouse at Peggy's was built in 1868. Exactly 100 years later, in 1968 the Campbell family opened the Sou'Wester Restaurant. The Sou'Wester had been in business for ten years when we visited on this particular day in June. The Sou'Wester celebrated its 50th Anniversary in 2018 and is still going strong. We always return to Peggy's Cove when we get back to Nova Scotia.

This image was from when one could still go into the DeGarthe Studio and stand on the balcony at the rear. I vaguely recall that William was not there that day and I missed speaking with him. I was not aware that he was really ill at the time. He suffered a heart attack shortly after this image in 1979 and was diagnosed with cancer in 1982. He died in a Toronto hospital on February 13, 1983 - William E. deGarthe William deGarthe (1907–1983) . I once watched deGarthe at work on his granite sculpture that was a tribute to the fishermen of the South Shore. I did not take his picture while he was working out of respect for the artist. deGarthe.htm

There were herring gulls waiting on almost every perch. The herring gull population declined sharply during 19th century when they were hunted for eggs and feathers. The herring gulls have increased greatly during 20th century and expanded their breeding range far to the south along the Atlantic Coast. These gulls were waiting to clean up after the catch was processed by the fishermen.

I was focussed on the boats and the buildings and the reflections in the water. I wanted to keep the brush strokes loose and heavy with paint. This canvas spent three months on the Singleton Studio easel - on and off.

You have so many beautiful works of art Phil! You've really captured the essence of Peggy's Cove!

Your comment helps to make it all worthwhile Robert. I keep painting in an effort to learn and grow as an artist. It really is a wonderful journey and support like yours really inspires. Thank you!

your work has MADE MY DAY!! thank you so much L/F and now Following you!!!

And your kind comment has in turn, MADE MY DAY! Thank you so very much.

Thanks Hanne... Canada is so very beautiful. There is not enough time in a day to do it justice. Your encouragement is greatly appreciated and valued.

Thank you so very much Gary... Kind of you to take the time and encourage me along my artistic journey. We are all in this together!

We spent a lot of time at Peggy's for sure. My wife said that I had painted it too many times and that I should move on. I revisited Peggy's this past winter in that 3x4 footer canvas. Fun:>)) Thank you so much!

Wow...just love the colors and the water and everything about this bright splashy painting...wonderful composition and brilliant abstract sky! What a beautiful and memorable day and a terrific backstory! Fantastic! l/f

There is a lot in this 3x4 footer. There are even discarded lobster traps just above the high tide mark. There isthe Group of Eight herring gulls. I considered making it the Group of Seven but that's already been done. That abstract sky is advection fog just on the coast. The thick fog was being stirred by the daytime winds. It was a fun canvas but it is time to move on after three months. Thanks Sunny!

Congratulations on you Feature in Canadian Artists for Fine Art America!

Congratulations on being featured in the FAA Group 'Art of Atlantic Canada.' To ensure your feature remains available over time, post your featured image(s) in the Group's 'Thanks for the Feature / Image Archive.' l/f and p if you allow pinning (www.pinterest.ca/tendrelimages/art-of-atlantic-canada/)

Thank you my friend!