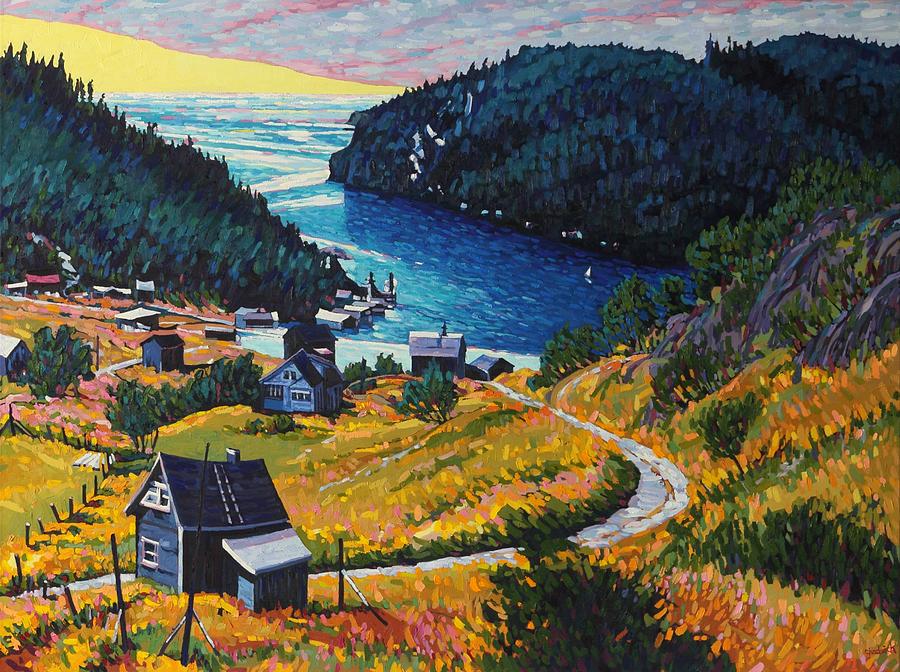 The story of Port Coldwell, the Group of Seven and Dave Sills "Fifty" music album intrigued me so much that I felt inclined to record it both in paint and words. The story needed to be told. Dave Sills is a terrific meteorologist who I worked with at Environment Canada. He is also a singer and songwriter whose Grandmother Agnes was born and raised in Port Coldwell. I wrote in an email to Dave Sills: I am headed into the studio with a Port Coldwell painting in my mind. May I use an image of yours from Flickr Dave? Maybe that old postcard too... Just an idea. I still need to select a canvas.

Here is what Dave wrote after seeing the sketch I completed after Day One on this project: That's really something Phil. Really draws the eye in. I know at least a dozen people that will want a print when it's done! FYI, that's my grandmother's house in the foreground on the left. That little wood structure just in front of it was a swing. Not sure why they had a ladder on the roof. Looks like it was to get to the chimney - maybe for frequent cleaning? Gid and Eileen's house was the one that is just above my grandmother's house in the photo. Please do use whatever imagery you would find useful from my collection! Just an FYI - AY Jackson painted a winter scene very similar to the one in the postcard. See attached (if you want - don't want to spoil your vision). And of course Lawren Harris painted several scenes in Coldwell. Take care, Dave.

The above is the result after a month on the easel. I continued to learn about Port Coldwell. I had never toured the remnants of the village although I passed by on the Trans Canada Highway several times. With the generous assistance of many who also loved the area, the owners of most of the landmarks have been identified. Thank you so much. The post card I consulted was from Kathleen Allen of Allen's Store in Port Coldwell. Those and other pictures of Port Coldwell are now in the collection of her daughter Ann Barker. I have been unsuccessful so far at making contact with Ann. Thank you to Stan Johnson, the President of the Marathon and District Historical Society, for this information.

About Dave's album "Fifty", in Dave's own words: "I had a really good team for the album - lots of pros. Alice is my daughter, Mike is my dad, Ken is my brother - this is a multi-generational recording!

This artwork is based on images from Dave Sills and postcards from Port Coldwell. I used the sky from #2236 "Singleton Sunset Altocumulus". In any case by May 31st I had taken the painting as far as it could go. I take an image of the work after most painting sessions and those are chronicled in the "in Progress" images. My wife was happy to see me doing more structures and fewer skyscapes. I tried my best and after a month I felt it was time to move on. To quote Leonardo Da Vinci however.....”Art is never finished, only abandoned”.

Thank you Maya! This is an historical piece that tells the story of the people who once lived in Port Coldwell. It is a ghost town now... Kind of you!

Congratulations on your sale

Beautiful, Phil. I would have bought that one. Bravo!

Beautiful! Congrats on your sale!

Thanks Darrel. I moved some things slightly to get the flow into the harbour. Had fun! Used lots of paint too. Life is good.

Just a wonderful work Phil - the story and background on the piece was amazing as well. Love it - just Beautifully done!

So kind of you Bruce to take the time and even read the story. We will all be history some day:>) and it would be nice if people of the future look back and think...

Amazing story behind this one and it is a beautiful and rich work with brilliant color and contrast and light! Love how the sparkling water and dazzling gold grasses lead you into this painting and you can almost feel the sun and the breeze. Magnificent and also fascinating because of the treatment of the structures with enough details to study and enjoy, Awesome palette and composition! Love it! Congratulations on another masterpiece of beauty in your very unique and recognizable style, Mr. Chadwick!

Very kind of you Sunny. I sometimes work from these historical photos. This one is 100 years old and from the Allen Port Coldwell collection I believe. It makes me remember that the land and the people were full of life and colour and not unlike us today a century later.